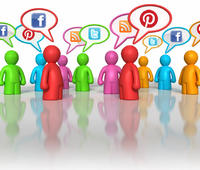 Pinterest, the explosion of the new social network of images

Photo galleries of the new social network Pinterest, are conquering the web.

Infact, only in march 2012, users of social network increased of 52% reaching 17.8 millions. Data, reported by research firm ComScore, confirm the success of the website, launched in the year 2010.

Pinterest is the new social network that collect videos and images of any kind organizing them in small rectangular photos as as if they were hung on a surface of cork.
Logged users can report the photographs viewed on the notice board, share and comment them.

The explosion of Pinterest was facilitated by the statements of politicians and celebrities: Ann Romney, wife of the  Republican candidate running for the White House, has begun to use it to organize his family photos and the American actress Reese Witherspoon declared social network contain “all the best things of the Earth”.
Also the American Army showed appreciations, spreading a regulation to learn how to use it.

Pinterest was launched 2 years ago by Ben Silbermann, former employee of Google with a initial funding of half a million dollars. For several months has passed almost unnoticed in the united States, than began the rain of new users that now threat to industry leaders, Facebook and Twitter.

« Domains .eu reach the quote of about...
Waves as the fusillo pasta to improve... »

Mini-electric scooter that drives itself: when the technology influences the...

Simple, understandable and functional informations in order to present the new productions realized...