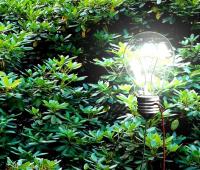 Plants and trees that generate electricity are obtained in Italy: each of their leaves generates a voltage of 150 volts, enough to simultaneously turn on 100 LED lamps. They are described in the journal Advanced Functional Materials and can become sources of electricity that are accessible worldwide. They were obtained in Italy, in the Micro-Bio Robotics Center (Cmbr) of the Italian Institute of Technology (IIT) in Pontedera (Pisa).

At the head of the research group are the creator of the first plant robots, Barbara Mazzolai, one of the 25 brilliant women of robotics in 2015, and Fabian Meder. The same researchers have also created a hybrid tree made from natural and artificial leaves, a possible pioneer of future forests that are capable of generating electricity from the wind.

Son of the European project Plantoid, which brought to the first robot factory in 2012, the new project lays the foundation for a new European project that starts in 2019, is able to grow as plants. In fact, the new robots will be partially powered by the energy produced by the plants. Researchers have reconstructed the natural mechanisms by which the leaves with a certain structure can produce electrical energy by converting the mechanical forces exerted on their surface, such as the pressure exerted by the wind.

The electrical charges are collected on the surface of the leaves by the process called "contact electrification", where the electrical charges are transferred from the surface to the internal plant tissue which, just like a cable, transfers electricity to the rest of the installation. transports. The electricity is then transferred to the outside of the installation by connecting a type of socket to the stem.

The same mechanism made it possible to obtain the first tree generator of electricity, an Oleandro Nerum, in which the artificial leaves, which touch the natural, activate the electricity generation of the plant. In the presence of wind, the hybrid tree therefore produces electricity and it is increased as the leaves are touched. It could be the first step to get forests in the future to generate easily accessible electricity around the world.