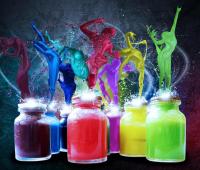 Alternative efficiencies and kinetic energy: the power of people

Do you like dancing ? Produce energy and light ... the track! Where? In Rotterdam , the Netherlands, the Watt disco, the place that calls itself "The World's First Sustainable Dance Club" and the first disco totally green friendly. Here's how to be born the fun conscious.

At the Watt were cut down energy costs of club classics and more on the floor was placed a system of magnets that , when stepped on by the dancers , produces energy to the sound of music.
The club has invested approximately € 6 million for a plant that helps reduce the electricity consumption by 320 % and 50 % higher than that of water, also lowering the toxic waste and the production of C02 .

Snacks and cocktails, strictly organic, are served in recyclable glasses, toilets are rainfed and even heating recycle the heat produced by screen walls and acoustic amplifiers.

To be more specific, in this club, have seen fit to take advantage of the kinetic energy created ( and wasted ) from groups of people! In the country of the tulips were invented the special flooring, then inserted into this gigantic disco, able to rake in energy by the passage of feet.