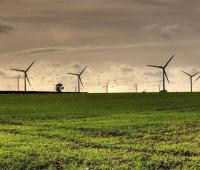 Components of a wind turbine: how is it made?

The question that arises is: how does a wind turbineoperate ?

Premise that not everyone knows that the best wind is at a hundred meters high, where it is stronger and less turbulent.
To use the wind, however, requires special technologies: Giants of the wind, the famous high wind turbines 100-130 meters, for example, that, even if composed of modules of thirty meters, it is not easy to transport, definitely not in Italy mainly characterized by coastal mountains and the Apennines! The same thing applies to the blades of wind turbines for these wind systems can measure up to 60 meters long and weighs 7 tons each.

Even before the logistics solutions, there are wind technologies that allow us to produce components bloated, others run a "mill" of this size without tearing itself apart under its own weight or under the influence of twiating for the rotation of the blades, still others that allow the transmission shaft to rotate without atriti or almost.

A wind turbine can be defined, in conclusion, a concentrate of the best technology we have today.

In Italy there are gigantic wind turbines are in operation but more than 5300 wind turbines of varying size with an installed capacity of about 6500 MW.

We go on to analyze the main components of a wind turbine taking as sample the model GE4.1-113, a model currently under study designed for a power of 4.1 MW and a rotor diameter of 113 meters, ie the circle described by the rotation of the blades: