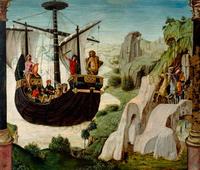 Who were the Argonauts ?

The Argonauts were the heroes which took part with Giasone to the conquest of the Golden Fleece on the Argo ship.

Argo ship was built by shipwright Argus and the mythology tells that the ship's company was specially protected by the the goddess Hera. It is said that the ship was promoted and carried out also thanks to the help of the goddess Athena, Zeus and his first wife's daughter; she was the goddess of the wisdom, weaving, crafts and of the most noble of the war.

She provided the oak wood, able to speak and make predictions because it came from the sacred forest of Dodona, necessary for the construction of the ship.

After its long  journey, Argo was consecrated to Poseidon in the isthmus of Corinth and its audacity allowed it to be turned into a constellation, the Argo Navis.

The story is very old and was celebrated in folk songs even before Homer.

In the years before the Trojan war, there was a group of heroes called Argonauts, fifty-five navigators guided by Giasone in searching of the Golden Fleece of the Colchis.

Lots of Argonauts became famous heroes, in particular during the Trojan war. Among the most famous are the Argonauts:

« Why choose ARGO as name ?
Why Environment, Energies and... »

Seven E.S.CO on the side of small-medium enterprises