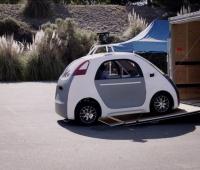 Road safety secured, controlled speed, saving time and energy, traffic jams unlocked , round eliminated ... Do you need anything else to stimulate the production of the new Google Car Electric ...
Just a password : RELAX !

The entire task of driving this car electric eco friendly and energy efficiency designed by Mountain View will be the responsibility of an "on-board computer", which, thanks to the work of cross- software and sensors, automatically adjust the speed and trajectory according to traffic conditions and weather .
The passengers (there are two places, at least in these early prototype versions ) will just have to indicate the target on a screen , press the start button and to stop.

"And it's not that they will relax and enjoy the ride",

explained the project director Chris Urmson , who a few days ago has officially announced the start of production of a hundred prototypes ensuring, therefore , various tests that will ensure , with the necessary refinements of the medium, a greater road safety all and allowing even those who are in trouble you can have your own transportation to move to.

The first phase of this new trial will be "assisted" by drivers in the flesh (which is why the car will also have traditional controls ) . If all goes as hoped, Google plans to launch within the next two years, a further series of tests on the road in California and start looking for partners for the next launch.

Here's the video that shows the reactions of the first passengers volunteers who tested the electric car that drives itself ... what to say ? A car designed especially " for all ages ! "

Reference: Authority for electrical energy and gas Newd  rules an e procedures for the...