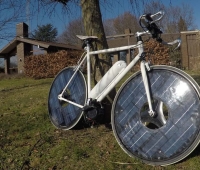 SolarBike: the e-bike powered by solar energy in the wheels and in the frame

The electric bicycle powered by solar energy is not new thing but SolarBike s the first  e-bike that incorporates the photovoltaic charge in the wheels  without limit its design and aerodynamics.

In Denmark the 90% of population has a bicycle and the 36% goes to work by bicycle every day. At this percentage also belongs Jesper Frausig, the creator of this solar bicycle really revolutionary: it is called Solarbike and it is the first electric bicycle powered by solar energy that preserves the lightness and design of a normal bicycle.

Usually, infact, the electric bicycles, to provide greater functionality, have some defects in the chassis and in aerodynamics. But Solarbike, unlike the other e-bikes powered by solar energy, assures the same performances of a racing bike even though it is an electric one thanks to its innovative system of charge  contained in its wheels, introduced by the danish Engineer.

When SolarBike is stopped, it recharges by itself thanks to its photovoltaic panels installed in its wheels and on the frame.
The stored charge is collected in a battery that begins to run when the bicycle moves, facilitating the ride.

It is possible to choose the exclusion of the electric battery or adjust the battery as needed (Standard 25 km/hour– Max 50 km/hour). Solarbike is equipped of a 550 watt engine mounted on the pedals. Infact, differently from the first electric bicycle with integrated solar panels in the frame, the Leaos Solar Bike, an invention Made in Italy, the design of the SolarBike is so integrated into the recharge sector to reduce the weight and increase the aerodynamics resistence of the bicycle, differently from its predecessor.

When there is no sun enough to recharge the bicycle,you can power the battery using any household outlet. And if you have already been begun to imagine yourself on your new electric bicycle, sorry but we must tell you that it is just a prototype, even if it is fully functional, for which Frausig is looking for lenders.