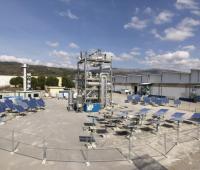 Solar energy from sand thanks to the solar thermal power plant made in italy, STEM®

The installation of the first solar thermal power plant in the world, "STEM®", was inaugurated in Sicily in order to obtain solar energy from sand. It is the result  from the collaboration between A2A and Magaldi Group, after many experiments for about a year and a half. Its construction of the plant in San Filippo del Mela, in province of Messina started in 2015.

STEM®'s goal is the storage (in a simple ad original way) of energy in the sand obtained during the sunny hours and then use it even when there is no Sun. A new technology of storage for the solar thermodynamic, applied for the first time at the solar generation.

STEM®, the Italian acronym of "Solare termodinamico Magaldi", is written all caps and it is a system that as above mentioned, allows to retain energy in the sand, which mixed with the air behaves like a liquid. STEM® is an innovative technology of solar thermodynamic that uses sand, as a way of thermal energy storage generated from the solar radiation, with the fluidized bed technology. It assures the continuous operation of the plant even without irradiation, during the night or with cloudy weather according to the required load curve. The module, with a capacity of 2 MW thermal of energy, needs the use of 786 heliostats and it extends on an area of 2.25 hectares, generating a daily production of steam equal to 20,5 tons.

STEM® is based on the fluidized bed technology, a technology that has been used over many years in the industry  for certain chemical processes but so far it has never been applied to accumulate solar energy.

"we are talking about a system consisting of solid parcels, in this case is sand, that are kept in suspension with air. In this way the air-sand mixture behaves like a liquid",

The sand is a perfect material: it doesn't pollute, is cheap, withstands up to 1600 grades. Its limit is that it doesn't exchange heat in a right way. The problem was resolved making sure that it takes the characteristics of a liquid that transmits heat in a better way.

"If you have pot or a bowl with a little sand in it and you drill some holes under it through which air can pass, when the speed of the air is enough to keep in suspension the parcels, the system behaves like a liquid. For example, if you tilt the free surface (the surface at atmospheric pressure conditions, ed) of the air-sand mixture remains horizontal just as if it were water. So, the fluidized bed technology combines some properties of liquids, such as viscosity and the opportunity to get going again, with the typical properties of solids. This system allows to absorbe heat and storage it even for long periods and also poterlo relocate it when you want. In this way, the STEM®, takes solar energy, accumulates it and then is able to exchange  this energy in order to produce high temperature steam. By using the machines already in use in existing power plants, this steam produces electricity".

Indeed, this "thermal solar battery" can be powered also with the heat coming from other sources such as biomass and natural gas. For this reason, it is a natural hybrid system.

« Smartlight allows to save energy at home
Contests and energy in Veneto: the... »