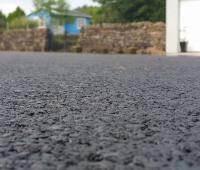 There is no limit to human genius, especially when you talk about "reuse" and "recycle".

The innovative idea comes from Scotland this time and more specifically it comes from the Scottish company MacRebur. It created an asphalt that reuse the plastic that causes pollution, transforming it into a new road surface, the MR6.
MacRebur's asphalt is a real revolution for streets and a sort of gift for the Planet because it could be the perfect way of resolving some international problems for example, how to use the million tonnes of plastic waste that are lying in the trash dumps around the world reducing expenditure for news streets, road services and reparating of potholes on the road che ogni amministrazione deve affrontare. Moreover, it makes streets more lasting.

There are over 45 millions chilometers of road around the world and, as usual, those are made up of 90% of rocks, sand and limestone and for 10% of bitumen.
The MR6 may be added in each tons of asphalt replacing bitumen with a mix thatmakes roads more sustainable and lasting. MR6 is an agglomeration added to the normal asphalt so the already existing production plants don't need changes. In this way, all over the world you can realize a new form of a cheaper and more lasting asphalt. Infact, MR6 is composed of 100 % of waste materials and it is available in the form of pellet and why it is very simple to operate and mix into the asphalt.

Standard bitumen has been modified by polymers for years. This furnishes an effective improvement of its rheology but thanks to MR6 you have found a product that makes the leap in quality of the 21th century.

« Alternative efficiences in the...
Ink made by smog like alternative... »