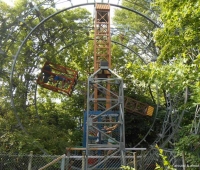 Attractions without electricity: in Treviso the sustainable fun park

As professional and as a fan of "energies sector", intrigued by this idea "made in Veneto" (Italy), Argo has well thought of share with you this deepening and perfect example of "Alternative Efficiencies".

The "Gardaland of the poors", this is the definition he gave it. A shining, original and sustainable idea, that sprang out from the need of expansion of Mr. Bruno Ferrin's tavern, the owner of the Osteria ai Pioppi, founded in 1969, in Nervesa della Battaglia, Treviso who has even been told on the english newspaper, 'The Guardian', that placed his creation in the classification of the 10 most bizarre attractions in the world. 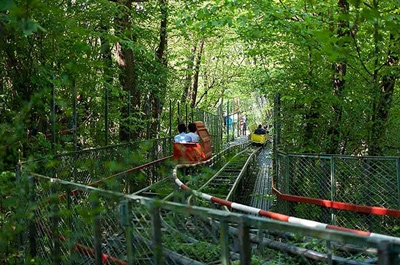 The ecological project is the result of lots of years of work and brain that Mr. Bruno has employed, in his garage, for 40 years, by building a sustainable fun park equipped with 45 attractions that function thanks to the energy of who use them, in the areabehind the tavern, a forest of chestnut trees, plane trees, elms, beeches, birches and poplars.

All this started, as often happens, from a simple idea, when Bruno Ferrin decided to create toys for children: the classic childrens slide, the seesaw and step by step began to take shape even more ambitious projects that ranged from trampolines to lianas, from ferris wheels to roller coaster.  From the giant trampoline till the attraction of Vitruvian Man; from the pendulum, continuing with the "Bicycle of the death", the bob, the slide 40 meters high, the route of war, the cableway and much more ... and it's not the end because it seems that, it's arriving a new attraction: a giant catapult! 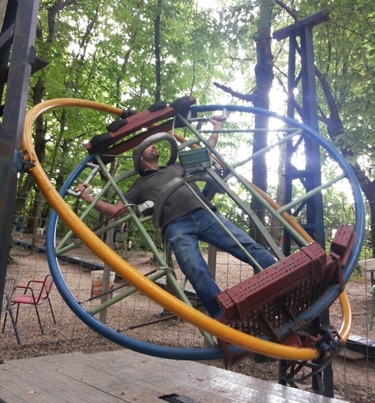 He thought and thought, and his thinking led him to the creation of the most simple attractions with recycled material and then to the development of the most complex ones making use of new materials and in collaboration with a carpentry.

The sustainable attractions are dislocated around an area of 30.000 square meters and, as we anticipated before, they function with the only man's hand. Clearly the safety factor is an element of great importance; the park is approved and maintenance is daily, and it is exactly to guarantee the safety and the tranquillity of everybody  that the entire project was developped and checked by qualified drafters and engineering firms of Treviso to check the flow rates, pressures and take care of its testing.
About the  "UNI laws in force" that focus primarily on electric attractions are hardly applicable and verifiable in terms of compatibility because the attractions function only thanks to the force of who use them, electrucuty is not so important (90€/year for the only attraction that provides a minimum use of electricity is the slide 40 meters high that requires very little electricity to initially bring up the cart with people). 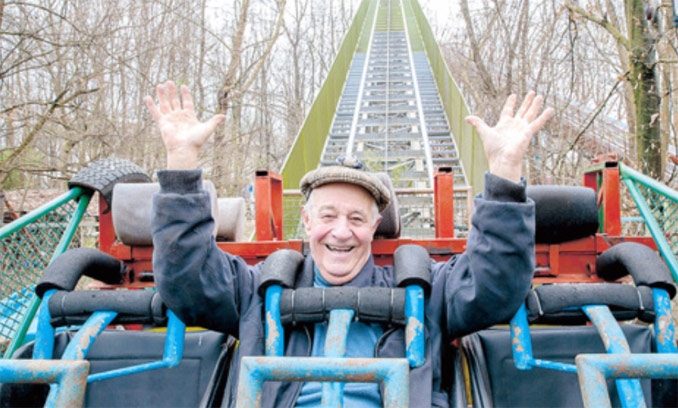 "I have been to Disneyworld in Orlando, to Gardaland and to Mirabilandia, but unfortunately i have found no inspiration. There is only mechanical stuff. You sit and you pay the ticket then you put your seat belts and you start. All is passive. By me, on the contrary, you have to sweat to have fun. The movement is the font of my ideas: I see a small rolling stone, a falling down leaf and I can think an attraction. For 2 years I'm working on a giant catapult and I hope to finish it no later than December".

So, the only used energy is ours; a sustainable fun in direct contact with the nature.
There is jus one reccomandation from Mr. Ferrin:

"Who see an attraction that is breaking down, please  un gioco che sta per rompersi, go to alert the checkout point".

The entrance to the fun park is free if you don't bring with you foods and drinks from home because it is welcome, but not obligatory, the consumption in the restaurant. The proposal is having so successful that, every year, thanks to low prices and the fun that lies ahead, the park attracts 50,000 customers.
The tavern and the park are open only on Saturday, on Sunday and during the public holidays from 10.30 a.m. until evening; the kitchen is open all day, dinner included except in august which opening is provided every day.

Clearly, this very intelligence idea talks about the importance and the results coming from the energy from movement and it remembers that similar news published by Argo about an already operative project in Netherlands relatively the use of kinetic energy into a disco!

The video of the sustainable fun park iun Treviso: A MAN, A DREAM