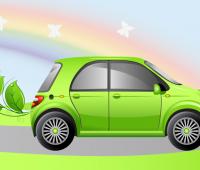 Without a doubt, yes! If we consider the relationship with the urban context: the electric car produces less pollution and less noise than traditional car. We need to ask if this technology does not shift the pollution in other areas, where energy is produced precisely.

According to a study conducted by prof. Sandro Furlan of the High School Eni Enrico Mattei and prof. Michele Giugliano of the Politecnico di Milano costs caused by 200 thousand electric cars with annual mileage of 5000 kilometers are still at least 3 times lower than the corresponding number of cars to traditional fuels.

These costs were in fact calculated including parameters such as:

Electric cars are therefore more "green", but their use is penalized by the cost of the technology (a compact car today costs about 40 million) and reduced autonomy. It thus appears that this technology will eventually be abandoned in favor of other techniques easier and less expensive as the hydrogen car.

« What are the environmental benefits of...
How do you extract energy from the... »