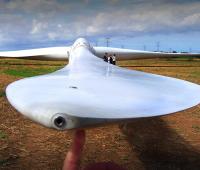 The European Union has surpassed 100 GW of wind power, the wind is now producing much electricity as 39 nuclear power plants or 62 coal-fired power, enough to meet the needs of 57 million homes. This was stated by EWEA, the European association of wind energy. It took 20 years to install the first 10 GW, but in the last 13 if they are installed 90. Half of European wind power capacity was installed in the last 6 years. In the chart the progress of the cumulative power in the EU from 1995 to 2011.

The annual production of electricity from wind energy in the European Union, noted EWEA, is equal to that of 62 coal-fired or nuclear power plants of 39 or 52 gas.

The same production with coal would involve the burning of 72 million tons of fuel, cost of € 4.983 billion and cause emissions to 219.5 Mt CO2, but if you replace the gas should burn with 42.4 billion cubic meters gas at a cost of 7.537 billion and with emissions of 97.8 Mt CO2.

To produce as much electricity gives the wind in Europe, says Christian Kjaer, CEO of EWEA

"should burn 72 million tons of coal per year in coal: a coal train from 750 thousand cars along 11,500 km, the distance between Brussels and Buenos Aires. Although you are using only a small fraction of the large European wind resources, wind energy is making a substantial contribution to energy security del'Europa. "

« Fuel cells: the market is growing
Japan: farewell to nuclear? »