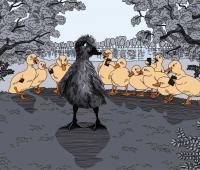 The Swiss Crime Prevention organisation (SCP) is committed to raising prevention awareness throughout society as a whole. Responsibility for this lies not only with the police, but also with politicians, other national organisations and offices, non-governmental institutions as well as business and the media.

It is of particular importance the easiness for the public and the private to indicate:

thanks to the modules without login in the official website of this Institutional Authority, as you can see in the following screen shot.

Everybody knows the famous fairy tale of "the ugly duckling". So, in this third news, we would publish the tale revisited by the SCP for the protection campaign by internet dangers direct also to the parents with children under 12: the revival of this beloved fairy tale, reinventing the content and the title in: "The young swan and the ducklings (really) ugly".

When you talk abouti "bullying" among youth, it takes place, for exampple, during the break at school but, increasingly the abuses happen even in the virtual space of digital media used to spread, through the Internet or mobile phone, despicable and defamatory messages, images or videos.

The cyberbullying is a very serious phenomenon because  in very little time victims can see their reputation damaged in a very wide community, even because contents, once published, can be seen in different places.
Parents and teachers often know anything because they have no access to communication network of adolescents. Therefore it could take a long time before a case comes to light.

The retelling of the tale of the ugly ducking and the moral described at hte end of this tale intercalated in the digital world could offer interestind  offrire interessanti clarifications and moreover possible preventions to address and manage this issue so uncomfortable but current.

All the fairy tales are in italian so you can visit the SCP website and chose the language you prefer. http://skppsc.ch/cms/it/cera-una-volta-internet/.

Ratting: the spying through pc webcam

It's called "ratting" the practice of espionage through the "Remote Administration Tool (RAT)" that...