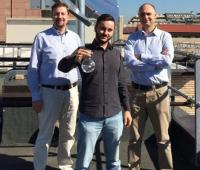 Researchers at the Polytechnic of Turin, in partnership with the MIT and the University of Minnesota have found an effective and inexpensive way to make drinking sea water, desalinating it.

Humanity is constantly lost to the problem posed by the presence of water almost unlimited but unnecessary to fill the needs arising from thirst, because of the huge salt content which would make the ingestion of sea water the same way as a shot intestines.

Thanks to the researches and experiments made by the Energy Department (DENERG) at the Polytechnic of Turin, in partnership with the MIT and the University of Minnesota, the sea salt water can be made "soft" (desalted) with the use of a membrane, namely thanks to a "sieve" capable of separating the water molecules from the salts in it disciolti.Dipartimento Energy

The energy required in this process of separation can be provided by a heat source, by an electromagnetic field or by hydraulic pressure from a pump. In particular, the Italian-American research has focused on the process of reverse osmosis for water desalination, based on the ability of some porous materials to be traversed only by pressurized water, removing it from the salt.

"A membrane for reverse osmosis allows the transport of water molecules, while blocking the dissolved salts. An efficient membrane then has the characteristic to be traversed by the greater quantity of water equal to energy required for the process, ie to possess a high permeability",

the researchers of the Polytechnic say.

With the aim of kill two birds with one stone and of use water and sun for purposes related to the supply aquifer, the Mit of Boston managed to create a particular water desalination system which allows not only to make drinkable  the water of the sea but uses solar energy to power its operation.

Using the presence of common solar panels, the photovoltaic water desalination system starts a process of reverse electrodialysis by separating the salty ions of the water from the oxygen and hydrogen molecules and then going on with a sort of purification able to make the obtained liquid completely free by slags or fixed residue, then totally drinkable.
Essentially, starting from the assumption that the salt dissolved in water is composed of ions (i.e. atoms loaded unbalanced) positive or negative, the systema manages to implement a particular chemical process that uses the action exerted by the electrodes in the water desalination system to lead ions to "break away" from the atoms to which they are linked and create a path opposite to that which is generated, for example, dissolving the common sodium chloride in a glass of water.

Researchers were able to understand the mechanisms that regulate the transport of water from one side (salt water) to the other (freshwater) of the membrane. The MIT laboratories, in fact, have measured experimentally the ability of the membranes to transport water, that the coefficient of diffusion of water infiltrated. These membranes are composed of zeolite, a material composed of a dense (and adjust) the network of pores with dimensions less than nanometer (less than a billionth of a meter).

However, the coefficient of water diffusion measured in laboratories is almost a million times lower than the expected value from the theoretical simulations and analyzes conducted by researchers at the Polytechnic of Turin. An enigma solved after more than two years of work.

"While previous studies had focused mostly on the transport process inside the membrane, we have focused us on what was happening on the surface, finding there the solution",

According to the authors of the project, the desalination could make drinking about 40-60% of sea water used in the process, allowing a huge water supply.

Plants and trees that generate electricity are obtained in Italy: each of their leaves generates a...